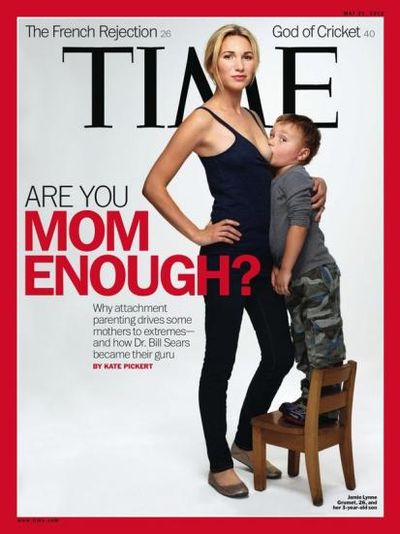 The May 21, 2012 issue of Time Magazine is a significant bellwether. It speaks volumes about the state of America’s steadily imploding media, of which Time Magazine has crossed a line into tabloid exploitation. It could well be the magazine’s Waterloo. The New York Post has nothing on Time Magazine anymore.

A presentational image of a “mother” casually standing in front of a photographer’s white screen with her left tit exposed to allow her nearly four-year-old “son” (with the unisexual Assyrian name of Aram) to suck on it. He wears army fatigue pants and a gun-metal-gray t-shirt, and stands on a child’s chair that makes him only 18" inches shorter than his mother. The image is offensive across a wide scale of social decency. Pedophilic overtones saturate the militarized image. The chair is important because it creates an optical illusion of the child being older — much older than he is. His limp hands dangle helplessly at his mother's crotch. Dressed in a black leotard with her right hand on her hip, and her left knee cocked so that her ballet-slipper-styled shoe heel rises from the floor, suggests a come hither expression attenuated by a rebellious fuck-you attitude that dares the viewer to guess at what else she’s capable of. Her dead facial expression makes her look like a machine-woman — an android.

The representational (versus presentational) distinction is important. Here is a woman, acting as a “model.” She uses her own child to make a political statement. Skinny, blonde, and objectively sexy with tan lines that demarcate her arms from her pale white breast, the woman (Jamie Lynne Grumet) clearly intends to be the poster mom for a cult that, at best, adds more sand on the scales to the belief that most people have no business procreating. The 26-year-old Grumet isn’t yet old enough to qualify for the MILF designation that some male readers will be tempted to bestow upon her. She looks closer to 18 than to 30. One thing is certain; she cares more about her political agenda/image than she does about the vulnerable child at her breast.

The headline “ARE YOU MOM ENOUGH?” establishes a bullying editorial tone with a military association — think, “Be All You Can Be.” The rhetorical question is only barely softened by the sub-head, “Why attachment parenting drives some mothers to extremes—and how Dr. Bill Sears became their guru.” Note the incorrect use of the word “guru,” which is a Sanskrit term for a teacher of “Indian religions.” Talk about mixed metaphors — they are here in spades.

Whether or not the photo personally offends you, you should recognize that the posed image is more than just provocative. No kind of parallel image involving a 26-year-old male and his three or four-year-old daughter would ever pass for anything other than an actionable example of incestuous sexual exploitation. It doesn’t help matters that the boy in question sports a belly. The child is already overweight. Whether or not the boy yet perceives a sexual relationship with his mother; the effects of his long-term breastfeeding are already visible on his body.

Aram’s camouflage pants underscore a significant aspect of the photo’s subtext. The boy is being fattened up for war. His artificially created mental, emotional, and sexual state will be repurposed by a military complex poised to capitalize on his unique psychology.

The fractures are showing at Time Magazine, and every other TMZ-influenced media outlet that makes up what passes for news in this country. America doesn't do news anymore. War on civility is declared. Are we DEMOCRACY ENOUGH to do something about it? Only time will tell. You can start by canceling your subscription to Time Magazine, and or never buying it again.

Listed below are links to weblogs that reference Time Magazine: