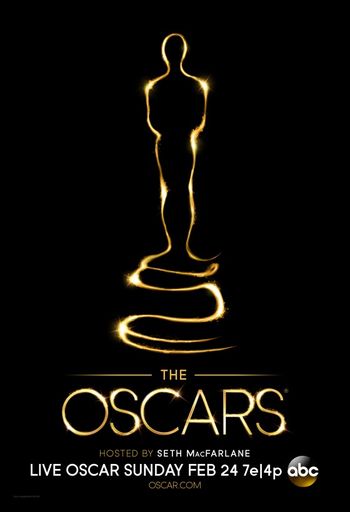 Ah, the glorious flaws of democracy! As a film critic, I learned long ago to abandon any sense of personal investment in the conclusions drawn by Academy Award voters about the most deserving participants in the seventh arts. As in every previous year, the 85th annual list of Oscar nominations comprises its share of clunkers — “Beasts of the Southern Wild,” glaring omissions — “The Turin Horse,” “Killing Them Softly,” and “Rust and Bone” are nowhere to be found — and blatant filler — “Argo” and “Sliver Linings Playbook” aren’t exactly the stuff of classic cinema.

Of the nominations for Best Motion Picture, you can rest assured that Quentin Tarantino’s genre masterpiece “Django Unchained” will remain unfettered by the weight of any stinking award.

“Beasts of the Southern Wild” is far too kooky for a win in any of its three categories (Best Film, Best Directing, or Best Actress). How it scored an Academy nomination with its indefensible resort to child abuse is a mystery.
As for “Les Misérables,” suffice it to say it’s no “Cabaret.”

“Sliver Linings Playbook” contains some respectable performances, but has all of the narrative impact of a half-dose of Alka Selter.

With its ten nominations in various categories “Life of Pi” will receive its share of little gold statues; Best Picture won’t be one of them.

That leaves us flipping a coin between “Amour” and “Lincoln.” I’m putting my dime on Michael Haneke’s “Amour.” I forgot about “Lincoln” by the next day except for the fact that the movie painted its racist subject as some kind of humanitarian. Cough. Yet I’m still savoring the wellspring of emotions that “Amour” stirred up.

The Achievement in Directing award should go to either Ang Lee for “Life of Pi,” or to Michael Haneke for “Amour.” But logic based on the past dictates that it go to Michael Haneke alongside his statue for Best Picture.

Benh Zeitlin (“Beasts of the Southern Wild”)  and David O. Russell (“Silver Linings Playbook”) will go home empty-handed. That said, Steven Spielberg is likely to be the one making a speech for his Academy no-brainer “Lincoln.” A cold glass of irony will sit between Tarantino and Spielberg for their vastly different depictions of slavery in the South. Tarantino’s version is a damn sight more cathartic and, oddly, more accurate.

Daniel Day-Lewis is a shoe-in for the Performance by an Actor in a Leading Role prize even if Hugh Jackman is more deserving for his superb work on “Les Misérables.” The Academy could surprise everyone and give it to Jackman. After all, the Oscars are all about the surprises, and this year will have its share.
Bradley Cooper (“Silver Linings Playbook”), Denzel Washington (“Flight”), and Joaquin Phoenix (“The Master”) will look great in their seats — well, Cooper and Washington will look elegant in their seats. Joaquin Phoenix will just look uncomfortable and out of place.

I’d be bemused if not entirely surprised if Emmanuelle Riva didn’t win an Oscar for  Performance by an Actress in a Leading Role for her overwhelming work in “Amour.” Her performance stands heads and shoulders above all of the competition — Jennifer Lawrence (“Silver Linings Playbook”), Jessica Chastain (“Zero Dark Thirty”), Naomi Watts (“The Impossible”), and  Quvenzhané Wallis (“Beasts of the Southern Wild”).

The Performance by an Actor in a Supporting Role honor will likely go to Robert De Niro (“Silver Linings Playbook”) because it’s the first bit of respectable acting De Niro has done in recent memory.

Personally, I’m blinded by Christoph Waltz’s expansive gifts in “Django Unchained.” I’d put my money on Waltz because, well, it is my money after all, and I know consummate acting when I see it. If you put Waltz and De Niro at the same party, I know which man I’d want to spend a few hours talking to.
Tommy Lee Jones suffered from a poorly written part in “Lincoln” that left audiences scratching their heads. Alan Arkin’s lighthearted efforts in “Argo” come across as throwaway because that’s how his part was designed — I’d still watch Alan Arkin read from a phone book and love every second of it. Phillip Seymour Hoffman sadly seemed like he was reading from a phone book in Paul Thomas Anderson’s hollow excuse for a movie “The Master.”  More filler.

Things get interesting in the Performance by an Actress in a Supporting Role category. Helen Hunt went over the moon in “The Sessions,” and really does deserve to receive the honor for her transparent portrayal of a sex therapist. Sally Field lit up “Lincoln” with some much needed female energy. Anne Hathaway gave an indisputably powerful performance in "Les Misérables." Less deserving are Amy Adams (“The Master”)  and Jacki Weaver (“Silver Linings Playbook”). Remember what I said about filler. The Academy will give the prize to Sally Field.

The Best Animated Feature Film category is crammed with worthy rivals. Tim Burton’s exquisite “Frankenweenie” sits agreeably alongside “ParaNorman,” ”The Pirates! Band of Misfits,” and ”Wreck-It Ralph” — “Brave,” not so much. I’d like to see the Academy give the award to ”The Pirates! Band of Misfits,” but I wouldn’t grouse if it went to any of the other nominees — except for “Brave.”

Original Screenplay is the one place where Wes Anderson [and his co-writer Roman Coppola] could win the limelight for “Moonrise Kingdom.”

Nonetheless, I believe the Academy will hand over the victory to Michael Haneke for “Amour.”

Obviously, Quentin Tarantino is the correct choice for the prize, but I don’t get the sense that the Academy is ready to welcome him into their club just yet. Not that it matters much since Tarantino already hit the international high watermark when he won the Cannes Film Festival’s Palme d’Or in 1994 for “Pulp Fiction.” The Academy is always a few decades behind.

John Gatins (“Flight”) and Mark Boal  (”Zero Dark Thirty”) will be left to drown their sorrow in after-party vodka rather than champagne.

The squishy category of Adapted Screenplay will likely find favor for David Magee, whose  ”Life of Pi” hits every grace note of religious predisposition Academy members lean toward.

It still wouldn’t be a surprise for Chris Terrio to get his chance to shout out thanks from the Oscar stage for his sugary script version for “Argo.”

The Best Foreign-Language Film Oscar should be a cakewalk for Austria’s “Amour.” Other contenders include “A Royal Affair” (Denmark), “No” (Chile), War Witch (Canada), and Kontiki (Norway).

Look for “Skyfall” to also take the Original Song trophy. Of the nominees, “Skyfall” is the only one that audiences will want to sit through, if nothing else to be wowed by the always mesmerizing Adele.

Rival contenders include: "Before My Time" (by J. Ralph for “Chasing Ice”), "Everybody Needs a Best Friend" (by Walter Murphy and Seth McFarlane for “Ted”),  "Pi's Lullaby" (by Mychael Danna and Bombay Jayashri for “Life of Pi”), "Suddenly" (by Claude-Michel Schönberg, Herbert Kretzmer and Alain Boulil for “Les Misérables”).

“Life of Pi” will take the prize for  Achievement in Production Direction. “Anna Karenina,” ”The Hobbit: An Unexpected Journey,” ”Les Misérables,” and “Lincoln” just don’t have as much visual oomph.

The Achievement in Cinematography Oscar should go to Roger Deakins for “Skyfall.” But “Life of Pi” (Claudio Miranda) could run away with the prize.
The other nominees are: "Anna Karenina” (Seamus McGarvey), “Django Unchained” (Robert Richardson,” and ”Lincoln” (Janusz Kaminski).

The Achievement in Costume Design statue will be handed to Jacqueline Durran for her great work on “Anna Karenina.”

The best-kept secret of the Oscars is the documentary category. The exclusion of Ken Burns’s “The Central Park Five” and Amy Berg’s “West of Memphis” are great oversights on the part of the Academy. “The Invisible War” deserves to take the Oscar considering the competition, but the Academy will likely present the award to the feel-good documentary “Searching for Sugar Man." The other contenders are: “5 Broken Cameras,” “The Gatekeepers,” and “How to Survive a Plague.”

Best Documentary Short Subject is the category that trips everyone up because hardly any of the public has seen any of the offerings. Sean and Andrea Nix Fine’s “Inocente” — about a young homeless artist — is a shoe-in. The other nominees include “Kings Point,” ”Mondays at Racine," “Open Heart," and "Redemption.”

“Life of Pi” is a lock for the  Achievement in Film Editing Oscar, though “Zero Dark Thirty” could squeak out its only prize of the night in this category. “Argo,” “Lincoln,”  and “Silver Linings Playbook” don’t stand a chance.

The Achievement in Makeup & Hairstyling trophy should and probably will go to “Hitchcock.” “The Hobbit: An Unexpected Journey” and “Les Misérables” are the other noms.

The glory of the Best Animated Short Film Oscar presents one of the most beguiling guessing games the Academy plays. Look for Walt Disney’s “Paperman” to walk away with this one. The other nominees are “Adam and Dog,” ”Fresh Guacamole,” ”Head Over Heels,” and Maggie Simpson in "The Longest Daycare."

The category for Best Live-Action Short Film seemingly exists only to tack another five minutes to an already overlong Oscar ceremony. Look for “Death of a Shadow” to walk away with the Oscar. “Asad,” ”Buzkashi Boys,” ”Curfew Death,” and  ”Henry” comprise the rest of the candidates.

It’s bizarre to imagine that Academy voters have the slightest clue about what fulfills the demands of the Achievement in Sound Editing category. On first blush a movie like “Zero Dark Thirty” would seem to have the requisite amount of woof and whistle to secure an Oscar from Academy voters who don’t know that “Life of Pi” is the title that most deserves the win. “Django Unchained,” “Skyfall,” and “Argo” make up the rest of the films considered in this category.

Common sense dictates that the “Achievement in Sound Mixing” Oscar go to the same film as won the Sound Editing award. Really, it’s just an excuse to give out another trophy to a movie that didn’t get a win in the previous category. Look for “Les Misérables” to get its just reward here. The other films considered for “Sound Mixing” are “Argo,” ”Life of Pi,” ”Lincoln,” and ”Skyfall.”

If you’ve made it this far into my predictions for the 85th annual Academy Awards, you probably feel like you’ve sat through three hours of backslapping and brownnosing. The Achievement in Visual Effects Oscar should and will go to Ang Lee’s “Life of Pi.” Don’t get me started on the other nominees — “The Hobbit: An Unexpected Journey,” “Marvel's The Avengers,” ”Prometheus,” ”Snow White and the Huntsman.” I could talk all night.

Listed below are links to weblogs that reference Cole Smithey Predicts the 2013 Oscars: