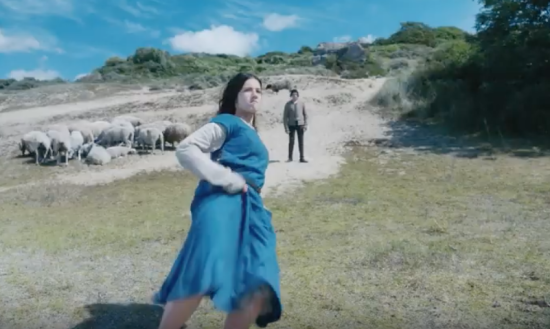 "A musical that tells Joan of Arc’s story through her victorious battles against the English, court case and death, burnt at the stake."

Dumont is one of Cinema's most inventive, and innovative, auteurs. Dumont's films transport the viewer to unknown yet familiar dramatic realms where magical realism thrives. "Jeanne" sees Dumont stepping into a musical dialectic that is certain to vibrate with universal energies. As thematically oblique as Dumont's films ("Camille Claudel 1915" or "Slack Bay") might seem on the surface, you can savor filmic satire as theatrically fresh and politically relevant as anything the Group Theater did in American in the '30s.

Lise Leplat Prudhomme promises a breakout performance in the title role. "Jeanne" is being screened in the festival's Un Certain Regard section.

"Bruno Dumont directed his first feature film at the age of thirty-eight: La vie de Jésus(1996), shot in Bailleul, where he was born. This film earned him immediate acclaim: it was selected for the Director's Fortnight, winning a Caméra d'Or Special Mention. Creating demanding, singular and raw works of cinema, Bruno Dumont returned to Cannes in 1999, in Competition, with L'humanité. He was awarded the Grand Prix and a double Best Performance prize for two of the films non-professional actors."

"Bruno Dumont moved away from Northern France to shoot Twenty-nine Palms in the Californian desert, a road movie that was selected for the Venice Mostra in 2003. In 2006, Flandres, a harsh film about the devastation caused by war, received the Grand Prix at the Festival de Cannes."