The Difference Between Liberals and Leftists BY TED RALL 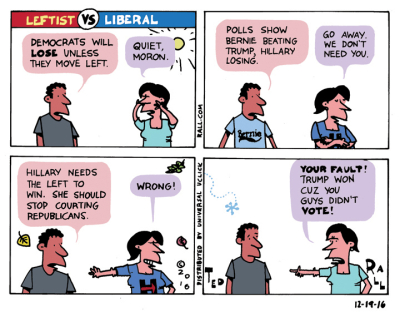 Living as they do in a bipolar political world where politics consists of Democrats and Republicans and no other ideology is real, media corporations in the United States use left, liberal and Democrat as synonyms. This is obviously wrong and clearly untrue—Democrats are a party, leftism and liberalism are ideologies, and Democratic politics are frequently neither left nor liberal but far right—but as Orwell observed after you hear a lie repeated enough times you begin to question what you know to be true rather than the untruth. Sometimes it’s useful in this postmodern era to remind ourselves that words still have meaning, that distinctions make a difference.

Let us now delineate the difference between liberals and leftists.

Bernie Sanders votes and caucuses with the Democratic Party, campaigns as an independent and self-identifies as a “democratic socialist”—an ideology without a party in the U.S. but that draws comparisons to Scandinavia. His stances on the issues are left of center but American politics have drifted so far right that he’s really a paleo-Democrat—there’s no daylight between Sanders 2020 and McGovern 1972. No wonder voters are confused!

Liberals and leftists want many of the same things: reduced income inequality, better working conditions, more affordable housing and healthcare. There are differences of degrees. A liberal wants the gap between rich and poor to shrink; a communist wants no class differences at all. They’re very different when it comes to foreign policy: liberals support some wars of choice whereas leftists would only turn to the military for self-defense.

Reading the last paragraph it is tempting to conclude, as I used to and many people still do, that there is enough overlap between the two to justify, even require, cooperation. Liberals and leftists both want to save the planet and the human race from climate change—why not join forces to fight the polluters and their allies the denialists?

The Nobel-winning economist Joseph Stiglitz is the ultimate liberal: a professor at Columbia, ex-chairman of the Council of Economic Advisers and former chief economist for the World Bank. An op-ed he recently published in The New York Times provides a perfect illustration of why a lasting working relationship between liberals and leftists will always be a pipe dream.

As is often the case with screeds by smart liberals, there is a lot to like in “Progressive Capitalism Is Not an Oxymoron.” (Let’s get the obvious out of the way: Yes it is.)

Stiglitz correctly identifies the problem: “Despite the lowest unemployment rates since the late 1960s, the American economy is failing its citizens. Some 90 percent have seen their incomes stagnate or decline in the past 30 years. This is not surprising, given that the United States has the highest level of inequality among the advanced countries and one of the lowest levels of opportunity.”

He correctly apportions the blame on “wealth-grabbing (or, as economists call it, rent-seeking),” businesses like hedge fund management that do not create anything but profits and the legacy of Reaganism: “Just as forces of globalization and technological change were contributing to growing inequality, we adopted policies that worsened societal inequities,” Stiglitz writes. “We relied more on markets and scaled back social protections.”

Then: “We could and should have provided more assistance to affected workers (just as we should provide assistance to workers who lose their jobs as a result of technological change), but corporate interests opposed it. A weaker labor market conveniently meant lower labor costs at home to complement the cheap labor businesses employed abroad. We are now in a vicious cycle: Greater economic inequality is leading, in our money-driven political system, to more political inequality, with weaker rules and deregulation causing still more economic inequality.” Boom! This.

Liberals like Stiglitz and leftists like me part ways when the discussion turns to solution. As Lenin asked: What is to be done?

Stiglitz answers: “It begins by recognizing the vital role that the state plays in making markets serve society. We need regulations that ensure strong competition without abusive exploitation, realigning the relationship between corporations and the workers they employ and the customers they are supposed to serve.”

“Government action is required,” he says.

We need “a new social contract between voters and elected officials, between workers and corporations, between rich and poor, and between those with jobs and those who are un- or underemployed,” he says.

Follow the link. Read the whole thing. I’ve included all the meat.

Stiglitz knows what is to be done. Mostly, he’s right. What he wants might not be enough. But it would do more good than harm.

What he does not know is how to make his proposals happen. Like the politics of all liberals, his is a toothless musing, a vacuous fantasy.

He said it himself: “Greater economic inequality is leading, in our money-driven political system, to more political inequality, with weaker rules and deregulation causing still more economic inequality.” This late-capitalism death spiral will not cure itself. There is no world in which corporations and their pet politicians and corrupt media propagandists will “recognize the vital role of the state.” They will not regulate themselves. They will not create “a new social contract.”

They are rich and powerful. The rich do not wake up one day and say to themselves, “Time to stop being a selfish ass, I’m going to redistribute my income.” The powerful do not care that the weak are miserable.

Money gets taken away from the rich one way: by force. The powerful are divested of their privileges the same way: when they have no choice.

Liberals and leftists identify many of the same problems. Only leftists understand that real solutions require serious pressure on the ruling elites. The credible threat of force—for example, a peaceful protest demonstration that could turn violent—may be enough to force reforms. But reforms always get rolled back after the left stops watching. Ultimately the rulers will have to be removed via revolution, a process that requires violence.

Liberals do not demand change; they ask nicely. Because they oppose violence and credible threats of violence, they tacitly oppose fundamental change in the existing structure of politics and society. Unlike leftists they are unwilling to risk their petty privileges in order to obtain the reforms they claim to crave. So, when push comes to shove, liberals will ultimately sell out their radical allies to the powers that be. And they will run away at the first sign of state oppression.

If you can’t trust your ally, they are no ally at all.

(Ted Rall (Twitter: @tedrall), the political cartoonist, columnist and graphic novelist, is the author of “Francis: The People’s Pope.” You can support Ted’s hard-hitting political cartoons and columns and see his work first by sponsoring his work on Patreon.)