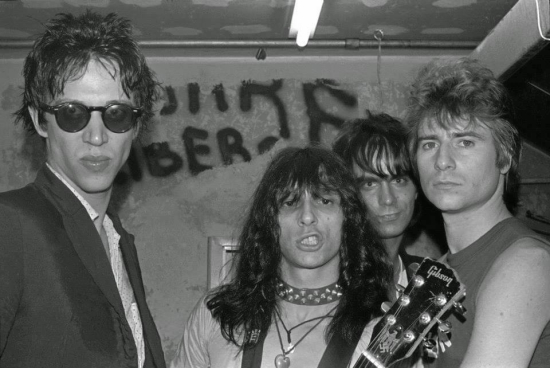 Johnny Thunders' band THE HEARTBREAKERS were the epitome of PUNK. They beat Tom Petty to the punch; the band was formed in 1975, a year before Petty used the name. Everything about their aggressive attitude, DIY style, and badass music carried an anti-authoritarian ethic and a streetwise swagger as powerful as a lion in attack mode. Think Iggy Pop. Sure they shared Iggy's taste for heroin; it went with the territory. I just wish there was a photo of Johnny, Iggy, and Miles Davis. That would be some badass shit to see. Of course a guitar duet with Johnny and Keith Richards would be even better. I love Keith Richards's playing but Johnny's playing had more punch, and meaning. 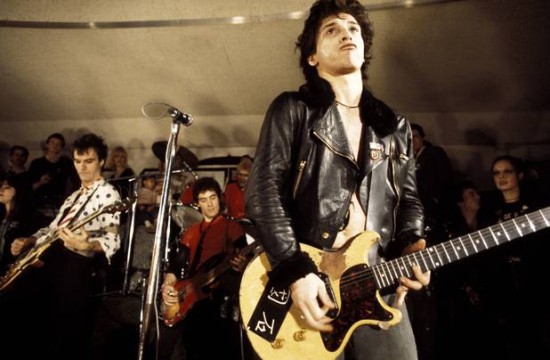 While the average picture might "speak 1000-words," this one spills ten times as much narrative information. Accented with a studded leather dog collar, Johnny's deliberate snarl stands between his bandmates' (Richard Hell, Jerry Nolan, and Walter Lure) sanguine resolve to give the kids what they wanted or, more importantly, needed.

And yes, that's a muthafuckin' yellow Gibson TV Les Paul Junior that Johnny milked filthy hot blues licks like Keith Richards taking a piss. Much blood, beer, and spit was spilled in the name of rock 'n' roll. And that ain't all. 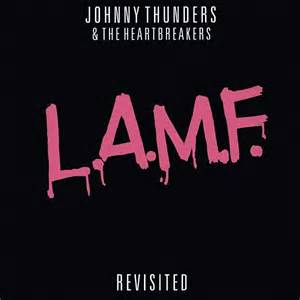 I got introduced to The Heartbreakers in the late winter of 1983 by my soon-to-be Rockin' Dogs bandmates Dave Ellison and Sammy Wilson when they came over to my place on Lorraine Street in San Diego. I was auditioning to be their drummer. I had my drums (a white Pearl kit) set up in my bedroom of the ranch-style house I shared with three roommates. I was a Drama major at SDSU at the time. Sam and Dave handed me a record to put on the turntable. It was a copy of JOHNNY THUNDERS AND THE HEARTBREAKERS LAMF REVISITED." You can guess what the letters stand for. They couldn't be more accurate.

I 'd never heard of Johnny Thunders even though I'd heard of The New York Dolls (Johnny's former band with David Johanson, Sylvain Sylvain, Arthur "Killer" Kane, and the fucking amazing (left-handed) Jerry Nolan on drums). For as much as I thought I knew about music, Sam and Dave were about to throw me into the deep end. They gave me a crash course in punk, country, rockabilly, blues and rock that took me from zero to 60 in about a month. We would sit in my living room and listen to Jonathan Richman, T Rex, The Cramps, The Stones, The Ramones, Johnny Cash, Patsy Cline, Loretta Lynn, The Damned, The Sex Pistols, The New York Dolls, The Go-Gos, The Clash, and the list goes on. 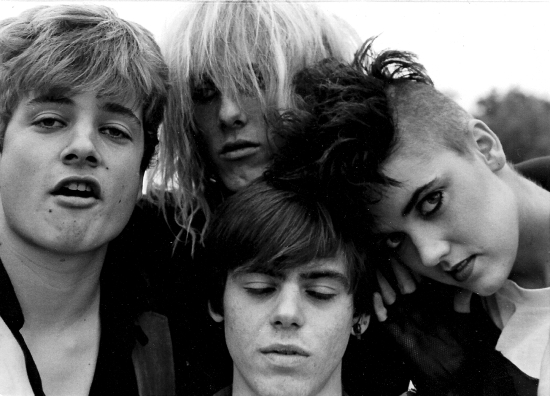 We went to see shows together too. I'll never forget going to see Jonathan Richman at SDSU in the downstairs club circa the exquisite "Jonathan Sings" record. We were there in time for the sound check, so we (Sam, Dave, and our bass player Jane Bunting) all sat cross-legged in front of the stage while JoJo got the sound he wanted on the PA. I've never before or since heard of a musician demanding that the volume be turned down, but Jonathan was serious. The show was fantastic. At the end, Jonathan announced he was auditioning guitarists, and anyone who wanted to give it a go could meet him backstage. The four of us went backstage and waited in a long white cinderblock hallway for the few guys standing in front of Dave, who took his opportunity to play Johnny B. Goode, as Mr. Richman requested from each contestant. Dave didn't get the gig, thank God;  we needed him for The Rockin' Dogs.

Dave had very specific ideas about music. He later turned my onto Travis Picking, one of my favorite guitar styles to play. 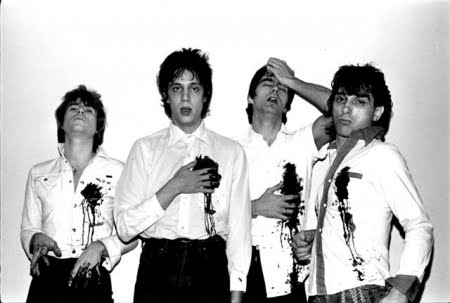