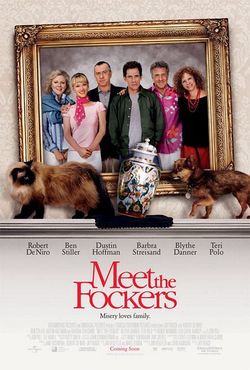 This sequel to the mediocre Ben Stiller comedy "Meet The Parents" is a bawdier but inferior movie that relies on the star-power of Dustin Hoffman and Barbara Streisand (as Stiller's Florida-dwelling Jewish hippie parents Bernie and Roz) to fuel its ill-timed toilet jokes.

Robert De Niro fares better than the rest of the cast in his role as an uptight ex-CIA agent at odds against ex-lawyer-cum-new-age bohemian Bernie (Hoffman). "Meet The Fockers" is an overlong comedy that never hits its stride.