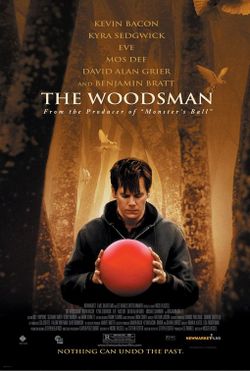 Kevin Bacon gives a vulnerable and brave performance as Walter, an ex-convict sex offender recently released after a 12-year prison sentence. Walter goes between his day at a Philadelphia lumber yard and his lonely apartment, uncomfortably located across the street from a grade school.

Pressures from Walter's hostile co-workers, his probation officer (Mos Def), and illicit sexual desires are pitted against his difficult attempts at romance with his co-worker Vicki (Kyra Sedgwick).

"The Woodsman" is a thoughtful and difficult film adapted from a stage play by Steven Fechter that dares to look deep into the mind of a pedophile, and the social environment surrounding this character's specific example. It is a profoundly responsible film made by a very talented, and benevolent, ensemble of cast and crew.