« THE UPSIDE OF ANGER | Main | MELINDA AND MELINDA »

John Boorman ("Deliverance") shapes an imperfect film centered around Africa's Truth and Reconciliation Hearings which allowed 21,800 Apartheid victims to tell their traumatic stories directly to the faces of the perpetrators who, in turn, were awarded amnesty if they spoke the truth in retelling their horrible actions.

Juliette Binoche portrays Anna Malan an Afrikaner poet-turned-radio journalist who reports on the trials even as they implicate members of her own family in the genocide of South African blacks. Anna seeks temporary adulterous release in the arms of infuriated Washington Post journalist Langston Whitfield (Samuel L. Jackson).

In spite of narrative missteps that negate the possibility of an empathetic protagonist, "In My Country" does viably introduce the African principle of "Ubuntu" whereby evil transgressions are absolved rather than revenged. It is a concept that western culture would do well to sit up and pay serious attention to. Sadly, this film is not strong enough to induce such interaction. 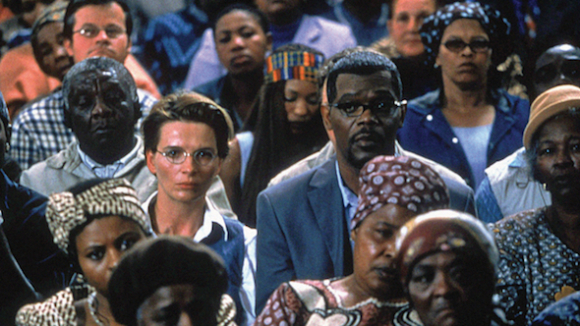 SUBSCRIBE to LA GRANDE BOUFFE (THE BIG FEAST) podcast on iTunes and follow us on SOUNDCLOUD.  If you're on an ANDROID DEVICE subscribe on STITCHER — TELL YOUR FRIENDS!