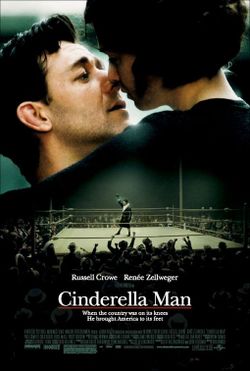 "Cinderella Man" is the first movie of 2005 to have multiple Oscar nominations written all over it thanks to a compelling script that’s expertly acted and directed.

Russell Crowe brings his estimable talents to bear as depression-era family man and boxer Jim Braddock, a downtrodden character you can't help but root for. The roughhewn Braddock keeps his priorities straight in the face of unrelenting social turmoil.

Renee Zellweger rises to the acting challenge opposite Crowe as Jim’s loyal wife Mae who provides a stable if worried guardian of familial well being. Paul Giamatti glues the story together as Jim’s stalwart boxing manager Joe Gould who guides his accomplished boxer through every fight. Director Ron Howard utilizes the film's music of silence to underscore the drama based on the real-life boxing underdog. The boxing sequences here are even better than those of Martin Scorsese’s bar-setting boxing drama "Raging Bull." Wow.