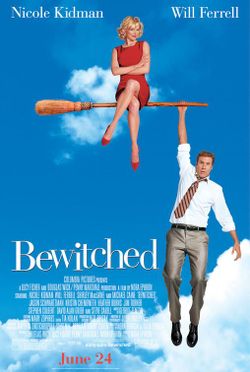 Nicole Kidman's career slips down yet another rung after her recent cinematic mishaps with "The Stepford Wives" and "Birth." Writer/director Nora Ephron ("You've Got Mail") knits together a misshapen movie using anomalous strands of narrative threads. With Sol Saks's well-loved television series as their stepping-off point, Ephron and co-scripter Delia Ephron overreach with a convoluted TV-show-within-a-movie structure that never takes flight. Jack Wyatt (Will Ferrell) is an ego-driven movie star reduced to doing sitcom television after a box office flop and a painful divorce. In an effort to avoid being overshadowed by his new "Bewitched" TV show co-star, Wyatt insists on using an unknown modest actress named Isabel Bigelow (Nicole Kidman), who is secretly a real-life witch. Ferrell keeps his character's comedic energy high in spite of his nonexistent chemistry with Nicole Kidman whose character comes off as conflict-ridden to a fault.

Listed below are links to weblogs that reference Bewitched: