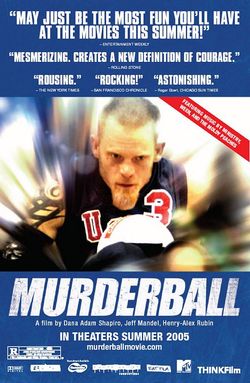 The quadriplegic rugby sport referred to as "Murderball" is lovingly examined in this well-crafted documentary. The film goes a long way toward showing the mental and physical fortitude of wheelchair bound athletes who insist on living life to the fullest. Filmmakers Henry Alex Rubin and Dana Adam Shapiro focus their attention on the indomitable Mark Zupan of Team USA and his fierce rival Joe Soares of Team Canada as the men drive their Quad Rugby teams toward the 2004 Paralympics Games in Athens. "Murderball" is an inspirational and poignant movie that shatters innumerable misconceptions about quadriplegics and their ability to function at a high level of physical ability. It's more than a little inspiring, to say the least.