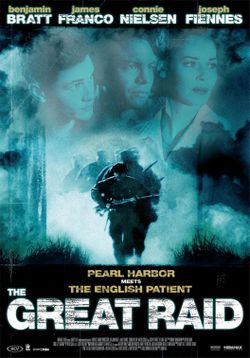 "The Great Raid" is director John Dahl's competent, if prosaic, telling of a true war story (the great raid on Cabanatuan) that occurred in the Philippines in 1945. The 6th Ranger Battalion undertook a mission to rescue more than 500 American prisoners-of-war from a Japanese POW camp. Benjamin Bratt gives a convincing performance as Lieutenant Colonel Henry Mucci who oversees the Battalion's able-minded Captain Robert Prince (well played by James Franco). Joseph Fiennes and Marton Csokas swing for the fences in their roles as desperate prisoners of the Japanese military. Undeveloped secondary characters and awkward pacing thwarts the movie from achieving its '60s war film ethos — similar to that of "The Great Escape."

Listed below are links to weblogs that reference The Great Raid: