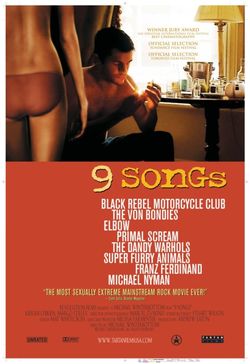 It's inevitable that some budding experimental filmmaker would eventually make the equivilent of "9 Songs." However, it's surprising that proven director Michael Winterbottom ("24 Hour Party People") would be the one attempting to make a mainstream pornographic movie. Cheers to to him for making such a bold effort. Sticking to a strict diet of sex, drugs, and rock 'n' roll Matt (Kieran O'Brien) — the elder of the couple — and his college-aged lover Lisa (Margo Stilley) exhibit their condoms-required sex acts between seeing live bands performing orgasm-timed three-minute pop songs. "9 Songs" is high-art pornography that doesn't neglect its compulsory gooey payoff scene. The movie is even bookended with travelogue sequences of the Antarctic to cleanse your senses. See it with a date. If you don't get luck afterwards, you're not playing your cards right.

Listed below are links to weblogs that reference 9 Songs: