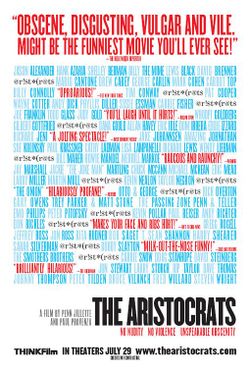 A plethora of comedians discuss and tell their own inspired rendition of "the dirtiest joke in the world" in a contagiously funny documentary that symptomatically gives context to the lasting influence of vaudeville humor. Hank Azaria, Billy the Mime, Drew Carey, George Carlin, Whoopi Goldberg, Gilbert Gottfried, Bob Saget and Sarah Silverman are just a few of the gifted comedians who contribute to this incredibly raunchy and irreverent movie about a joke that begins with, "a couple walk into a talent agent's office." Trey Parker and Matt Stone contribute a South Park telling of the "Aristocrats" joke that alone makes the movie worth the price of admission. "The Aristocrats" is a great litmus test for which of your friends can or can't take a joke, because this is one damn dirty joke that tells as much about the teller as it does about its audience.

Posted by Cole Smithey at 12:15:53 AM in Comedy, Documentary

Listed below are links to weblogs that reference The Aristocrats: