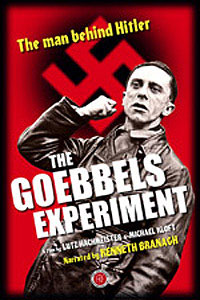 Kenneth Branagh narrates excerpts from Nazi Minister of Propaganda Joseph Goebbels's daily diaries as filmmakers Lutz Hachmeister and Michael Kloft display a wealth of footage from Goebbels's prodigious speeches along with incredible footage from inside Germany during the war. "The Goebbels Experiment" is a candid examination of a propagandist who could be credited with exemplifying the unscrupulous idea of what we now term, "spinning a story." Goebbels (1897-1945) reaches his height of contempt for the German people when he adopts his critics' slogan "Blood, Toil, Tears & Sweat" for its side effect of protecting the Nazi Government "against any setbacks." Although the film's conclusion is rushed and unsatisfying, "The Goebbels Experiment" is a priceless document of one of Nazi Germany's cruelest and most effective architects.

Listed below are links to weblogs that reference The Goebbels Experiment: