« The Goebbels Experiment | Main | The Aristocrats » 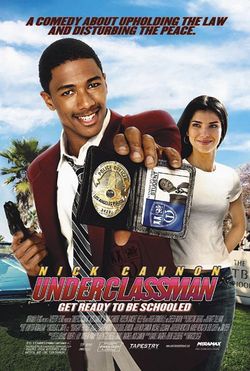 Formula rogue-undercover-cop genre trappings mix with repetitive comic punchlines in a lifeless effort from screenwriters David Wagner and David Goldberg ("The Girl Next Door"). Tre Stokes (Nick Cannon - "Drumline") is a fuzzy-chinned college-aged undercover LA cop who's willing to chase escaping criminals by riding a child's bicycle in hot pursuit. So it is that when a case involving murder at an elite private high school, Tre coaxes his way with police Captain Delgado (Cheech Marin) to go undercover at the prep school as an overzealous student with a secondary ulterior motive of replacing his G.E.D. with a high school diploma. Even the chase scenes sag as debut director Marcos Siega disappoints audiences at every turn.

Listed below are links to weblogs that reference Underclassman: