« The Aristocrats | Main | Charlie and the Chocolate Factory » 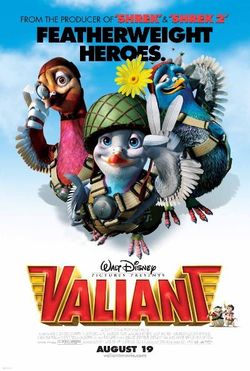 A computer generated prepubescent Chicken Little (inexplicably named Valiant and voiced by Ewan McGregor) pushes his way into an elite unit of WWII carrier pigeons (the Royal Homing Pigeon Service) where his blind patriotism pays off. Burdened with sluggish pacing and a dull storyline, "Valiant" sits as a capricious piece of pro-war propaganda for children. The humor is accented by fart jokes and a disregard for any historical truth regarding WWII. Posited as an homage to British war films like "The Battle Of Britain," "Valiant" comes up woefully short with yawn inducing aerial sequences that lack even a modicum of originality. You're are much better off renting "Chicken Run" for an evening of entertainment with your young progeny.

Listed below are links to weblogs that reference Valiant: