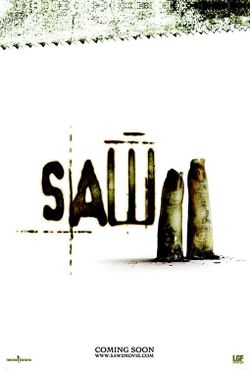 One-part "Silence Of The Lambs," one-part "Ten Little Indians" and carrying a lasting dosage of "Se7en," "Saw II" reveals a horror franchise to be reckoned with. A superior grade of actors, and a virtuosic application of gore, make the sequel more entertaining than the original even if the movie bogs down under gallons of Karo syrup blood and nebulous plot excursions. A group of eight strangers attempt to escape from a sealed house ingeniously booby-trapped by serial killer Jigsaw (Tobin Bell). Detective Eric Mason (Donnie Wahlberg – "The Sixth Sense") attempts to rescue his teen son Daniel (Eirk Knudsen) from among the trapped victims."Saw II" represents a horror sub-genre called "torture-porn." You'll know why.

Listed below are links to weblogs that reference Saw II: