« INTO THE BLUE | Main | Everything Is Illuminated » 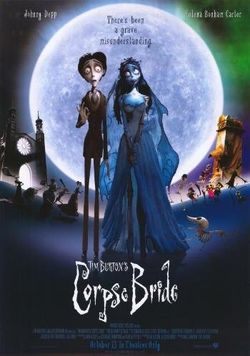 "Better Off Dead" would have been a better title choice for Tim Burton’s self-indulgently macabre attempt at creating an animated underworld of gleeful singing corpses. Burton and co-director Mike Johnson set the quirky animated action in a drab 19th-century English town where one very lonely Victor Van Dort (voiced by Johnny Depp) is uncomfortably poised to marry a poor little rich girl Victoria (Emily Watson). Victor makes the mistake of practicing his wedding vows in a forest where his Corpse Bride’s (Helena Bonham Carter) hand receives the wedding ring intended for Victoria. Victor is pulled beneath the earth where a festive world of dancing and singing corpses await new additions to their number. As Victor struggles to get back to Victoria while falling in love with his Corpse Bride, the story becomes a muddled and unpleasant affair that makes being dead look a lot more fun than the dreary lives Victoria and Victor are doomed to lead. "Tim Burton’s Corpse Bride" is a children's movie of very limited appeal.

Listed below are links to weblogs that reference Tim Burton’s Corpse Bride: