Two For The Money 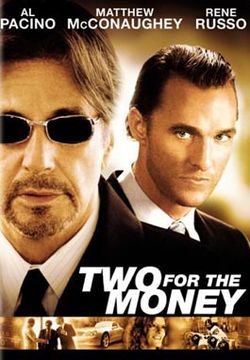 Al Pacino becomes a pale imitation of his memorable former roles as Walter Abrams, a cable television sports-gambling consultant running an office of hotshot salespeople out of his live-in Manhattan apartment building. Matthew McConaughey gets to show off his chiseled bod as ex-football star Brandon Lang when Abrams takes him under his wing to transform Brandon into a football pick-em guru called "John Anthony." Homosexual undertones abound as the duo's "father/son" relationship is strained by greed and the presence of Walter's reformed junkie wife Toni (Renee Russo). Even at his worst, Al Pacino can charm the birds from the trees, but in "Two For The Money" pigeons are the only species of fowl doing the visiting.

Listed below are links to weblogs that reference Two For The Money: