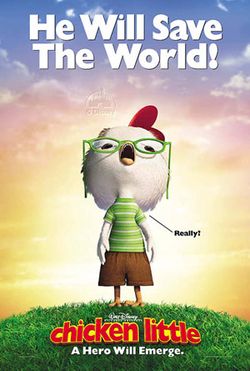 The parable centers on an alien invasion that threatens to finish of the earth. After Chicken Little (Braff) is publicly dismissed as a nut case by the community for his famous "sky is falling" incident, the child chick attempts to win respect by joining a baseball team with the support of his fellow outcast friends Abby Mallard (Joan Cusack) and Runt (Zahn).

Characters break into song and dance over ‘70s pop hits that would be better left forgotten. "Chicken Little" doesn’t hold a candle to "Wallace & Gromit: The Curse Of The Were-Rabbit."