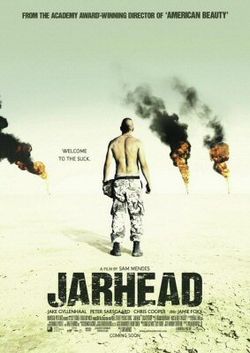 Director Sam Mendes delivers a full-blooded rendering of Marine Anthony Swofford’s unvarnished meditation on war with a theatrically bound story that could also work well as a stage play. With a script version (by screenwriter William Broyles Jr.) — based on Swofford’s book —Mendes apprehends the character driven motivations of confusion, boredom, fear, and self-loathing that torments a group of every-soldiers waiting for months in the Arabian desert for the Gulf War to begin. They're dying to kill something — anything. "Jarhead" is the most unconventional anti-war film ever made because it candidly reveals the mental condition and attitudes of its participants without ever fetishizing or glamorizing violence. Practically all of the brutality we witness is of a psychological nature. "Once you go to war -- you will always be at war," is the clear message of this brilliant film.

Listed below are links to weblogs that reference Jarhead: