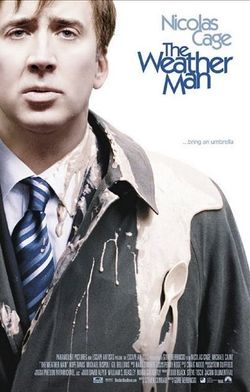 Poor little wealthy Chicago television weatherman Dave Spritz (Nicholas Cage) mistakenly attempts to reunite with his wretched ex wife (Hope Davis) as he struggles with low self-esteem issues exacerbated by his uncaring father (Michael Caine). Even the promise of a high-paying job with a national morning TV show doesn’t encourage Spritz when strangers are constantly throwing fast food at him and his children suffer humiliations he is incapable of protecting them from. Director Gore Verbinski ("Pirates Of The Caribbean: The Curse Of The Black Pearl") is hamstrung to elevate newbee screenwriter Steven Conrad’s droning script. The story is a cynical yet apolitical vision of postmodern capitalist ennui. If you’ve never heard of a "living funeral," this film is an icy introduction.

Listed below are links to weblogs that reference The Weather Man: