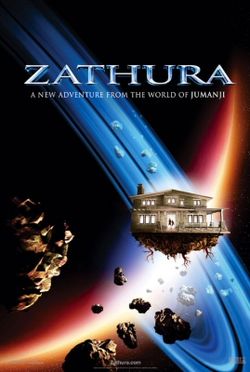 Based on the children’s book by author Chris Van Allsburg ("Jumanji" and "The Polar Express"), "Zathura: A Space Adventure" is an example of why "deus ex machina" is one of the seven deadly sins of screenwriting. Still, Jon Favreau shows confidence in the directing style of his third feature film (after "Made" and "Elf.") Ten-year-old Walter (Josh Hutcherson), his 6-year-old rival brother Danny (Jonah Bobo), and their teenage sister Lisa (Kristen Stewart) are spending divorce visitation time with their father (Tim Robbins). Danny discovers a ‘50s styled pressed-tin, wind-up board game called "Zathura." With daddy away on an errand, the boys begin playing the game that involves two racing tin rockets and a slot where cryptic message cards are ejected. A house-penetrating meteor shower initiates the children’s journey into outer space with their uprooted house, which serves as a spaceship where a defective robot, alien lizard creatures, and a Gen X astronaut stranger (Dax Shepard) conspire to appease the sibling rivalry between the brothers.

Listed below are links to weblogs that reference Zathura: A Space Adventure: