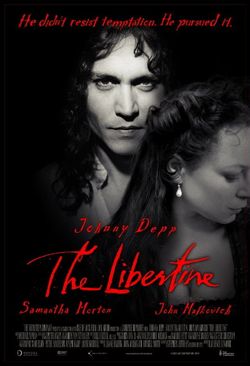 Based on Stephen Jeffreys' play, about 17th century iconoclastic poet the 2nd Earl of Rochester (Johnny Depp), "The Libertine" fails to pay off on its promises of taboo sex. Depp opens the movie with a ribald presentational monologue about how much you (the audience) will not like him due to his sexual prowess with both men and women. However, Depp's outwardly bawdy character becomes impotent when he falls for, and mentors, Samantha Morton as an untalented Restoration-era actress with uncertain promise. Cinematographer Alexander Melman maintains a drab visual motif as the Earl writes a slanderous play about Charles II before meeting his waterloo.

Listed below are links to weblogs that reference The Libertine: