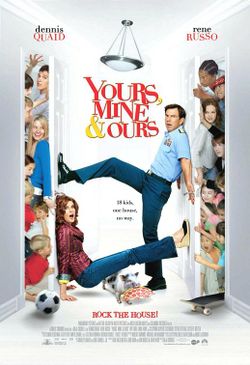 Regardless of a distinct lack of romantic chemistry between Dennis Quaid and Rene Russo, the able-bodied actors let rip the slapstick demands of this run-of-the-mill family comedy based on the 1968 movie — which starred Henry Fonda and Lucille Ball. Widower Navy Admiral Frank Beardsley (Quaid) commands his eight kids with military discipline. However, Frank’s methodical ways are challenged when he suddenly reacquaints with, and marries, his high school sweetheart Helen North (Russo). Helen is a widow with ten kids of her own. Helen's style of parenting couldn’t be more different than Frank’s. As the couple's 18 children work together in their common goal to instigate a divorce between Frank and Helen, the family begins to value their kinship.

Listed below are links to weblogs that reference Yours, Mine & Ours: