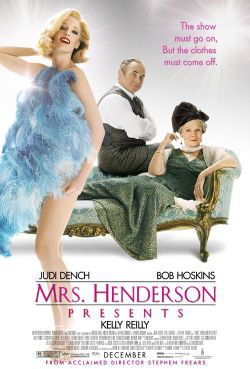 Esteemed British director Stephen Frears eloquently transports the story of a ‘30s era English widow. Mrs. Henderson (Judi Dench) purchases a London theater and hires veteran stage manager Vivian Van Damm (Bob Hoskins) to run it. Mrs. Henderson’s sultry motives come to the fore as she imposes her political clout to bare the naked bodies of her theater’s dancers to the delight of the young soldiers who fill the seats every night. Hoskins and Dench share a unique chemistry that pierces the story’s heavy-handed construction.

Listed below are links to weblogs that reference Mrs. Henderson Presents: