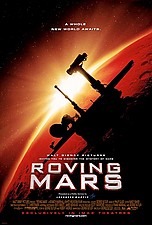 The interaction of two amazing NASA roving robots, named "Spirit" and "Opportunity," with the mysterious terrain of Mars is authentically captured by writer/director George Butler on IMAX cameras. Butler ("Shackleton’s Antarctic Adventure") takes the viewer behind the scenes at NASA to witness the invention and construction of the mind-boggling solar-powered robots by a group of more than 4000 scientists, technicians and laborers. The director makes a colossal cinematic leap when he shows the launch and landing of the robots on Mars before depicting their dramatic discovery that water once existed on the tiny planet. "Roving Mars" is an unforgettable and informative movie that more than fills the IMAX 100’ X 80’ screen with far away images that make every viewer an astronaut.

Listed below are links to weblogs that reference Roving Mars: