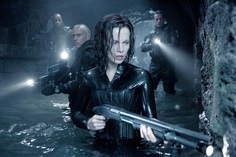 The blue-tinted sequel to "Underworld" (2003) sees the return of director Len Wiseman, along with Scott Speedman, Bill Nighy and the fetishistically clad Kate Beckinsale as the hunted vampire Selene. The worlds of vampires and werewolves continue to collide as Selene and her lycan hybrid lover Michael (Speedman) try to unlock the secrets of their bloodlines while attempting to revenge the betrayal of Selene’s own family as instigated by Marcus (Tony Curran) the king of the vampires. Nudity and excessive exposition accompany gore-infused visual f/x in this splashy modern Goth extravaganza.

Posted by Cole Smithey at 10:52:06 PM in Action/Adventure

Listed below are links to weblogs that reference Underworld: Evolution: