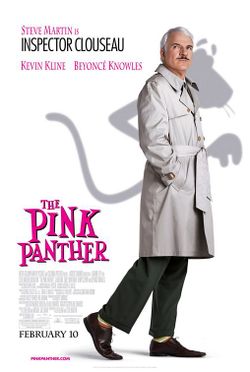 From the witty franchise that Peter Sellers and director Blake Edwards made famous comes a pale offshoot that lacks sufficient tempo, tone and supporting characters to make it satisfying. Steve Martin overreaches to create his own take on the bumbling French detective Inspector Clouseau beside lackluster performances from Kevin Kline, as France’s Chief Inspector Dreyfus, and Jean Reno as Clouseau’s impassive sidekick. Inspector Dreyfus hopes to solve the murder of France’s soccer coach and the theft of the Pink Panther diamond as he makes every effort to humiliate Clouseau. Director Shawn Levy ("Cheaper By The Dozen") makes insipid use of an overly bombastic musical score in overt attempts at milking audience reaction from poorly executed comic sequences. Beyonce Knowles is distinctively bereft of acting skills as international pop star Xania.

Listed below are links to weblogs that reference The Pink Panther:

How true. The real ones from earlier were amazing! These sucked