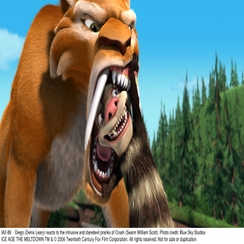 Although hampered by a literally pedestrian story about prehistoric animals on a trek to escape from rapidly melting glaciers "Ice Age: The Meltdown" succeeds on its merits as an animated visual feast of animal acrobatics that adhere strictly to the laws of gravity and physics. Ray Romano, John Leguizamo and Denis Leary return to the franchise to endorse the sequel in their respective vocal roles as Manny the wooly mammoth, a lisping sloth named Sid and Diego the saber-toothed tiger. Queen Latifah adds charm and romantic tension to the movie as Ellie a wooly mammoth who thinks she’s a rodent. As with the first "Ice Age" movie it is Scrat the acorn-obsessed rodent who bookends the movie and steals the most laughs with his hilarious attempts at obtaining an ever-elusive acorn.

Listed below are links to weblogs that reference Ice Age: The Meltdown: