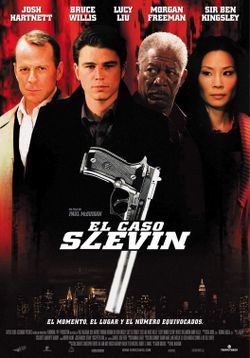 Josh Hartnett ("Sin City") indulges in a snappy tongue-in-cheek puzzle of a thriller that’s akin to eating ten flavors of ice cream. A fast twitch opening sequence torn from the pages of Tarantino’s playbook introduces Bruce Willis as a cunning and calm assassin with the gift of gab. Before you can say, "Kansas City shuffle" Mr. Goodkat (Willis) has laid out a flashback murder-filled tale of familial tragedy brought on by a father’s misguided attempt to bet on a mob-fixed horse race. The fact that Mr. Goodkat tells the story to his next victim before dispatching him in public hints at the misdirection that 28-year-old screenwriter Jason Smilovic uses to lure the audience deeper into the folds of his angular story.

Posted by Cole Smithey at 11:11:39 AM in Action/Adventure

Listed below are links to weblogs that reference Lucky Number Slevin: