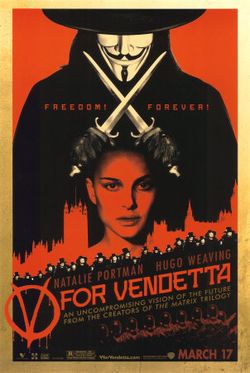 Scripted by Andy and Larry Wachowski ("The Matrix" trilogy), "V For Vendetta" is a razor-sharp cinematic reinterpretation of Alan Moore’s scathingly dissident 1988 political satire graphic novel. The action is set in a slightly futuristic Britain. The bold narrative cautions against the dangers of corruption, media manipulation, and a pervasive government repression exercised through fear. Natalie Portman’s intense portrayal of a civilian polarized into rebellion anchors the movie. "V For Vendetta" is a piece of pop-culture-subversive-cinema that operates on multiple levels. On the surface, it’s a love story set in the depths of social despair, but it’s also a visionary tale of social uprising. As a reflection of the differences between freedom and repression, the movie provides a social terrain that seems more native than alien, and therein lies its central thesis about fighting for freedom. You come out wanting to do something.

Posted by Cole Smithey at 12:54:05 PM in Action/Adventure

Listed below are links to weblogs that reference V For Vendetta :