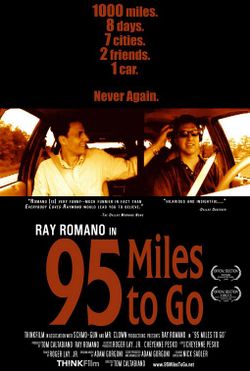 Comedian Ray Romano is shown is all of his peculiar and neurotic grandeur in this candid documentary of an eight-day comedy tour through the South. Romano’s longtime comic friend Tom Caltabiano rides shotgun while the flight-phobic comedian drives their rental car with two digital cameras attached to the dashboard. The contrast between Romano’s effortless stand-up routines before large corporate audiences and his touchy everyday demeanor plays like a twisted reality show where the class clown is also the teacher. The laughs are infused with a dry biting wit that’s too blunt to be called sarcastic. You won’t get a bellyache, but you just might get a headache.

Posted by Cole Smithey at 10:14:44 PM in Comedy, Documentary

Listed below are links to weblogs that reference 95 Miles To Go: