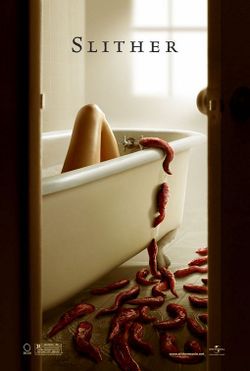 If there were still drive-in cinemas around, "Slither" would be a perfect B horror movie to sit in your car and watch to the sound of shrieks and one-liner jokes blasting around a hilly parking lot from so many tiny speakers. Small town Americana is turned upside-down when an alien-bearing meteor crashes in the woods only to be discovered by Grant (Michael Rooker) the rebuffed-but-loyal husband of Starla (Elizabeth Banks), the cutest little filly in town. Grant gets impaled by an alien stinger that sends him on a feeding frenzy of livestock and the horny seduction of a local slut who in turn blows up bigger than a Cadillac before releasing thousands of slug creatures. The slugs turn nearly everyone in the town into walking zombie extensions of Grant’s off-kilter personality. Bill Pardy ("Serenity") is perfect as the town’s manly chief of police still carrying a torch for Starla. "Slither" has just the right formula of humor, suspense, and over-the-top gore to keep audiences jumping and laughing in their seats.

Listed below are links to weblogs that reference Slither: