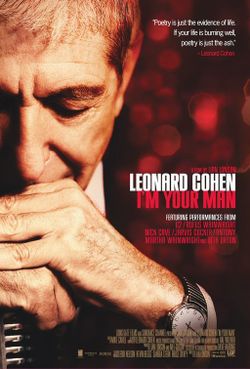 Filmmaker Lian Lunson uses a 2005 Sydney tribute concert to Leonard Cohen as a home base for her relatively shallow examination of the best folk singer to slit your wrists to. Rufus Wainwright’s performance of Cohen’s song "Hallelujah" (prominently featured in "Shrek" and "Lord of War") outshines every other artist in the show, including Nick Cave, U2, and Beth Orton. Lunson gives brief glimpses into Cohen’s painstaking and overwrought writing process that gave him currency with Beat poets, Janis Joplin and ‘70s punks before the melancholy malcontent from Montreal turned to Buddhism. If anything, Lunson’s amateurish film makes Leonard Cohen’s depressing music seem more entertaining than it really is.

Listed below are links to weblogs that reference Leonard Cohen: I’m Your Man: