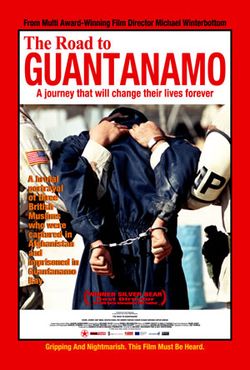 Director Michael Winterbottom brings us face-to-face with the national humiliation of Guantanamo prison where the Geneva Convention and legal protocol have been disposed of like the now-filthy rivers of our country. The docudrama is based on a dossier by the "Tipton Three," a group of young British Muslims who spent two brutal years in Guantanamo on false charges after departing from a wedding in Pakistan for Afghanistan where they hoped to provide volunteer services for its embattled civilians. The "Tipton Three" were the first, and only prisoners to date, to be released from Guantanamo; they were released without ever being charged and without apology. Winterbottom tells the story using the detainees themselves as actors suffering the same humiliations, deceits and acts of violence that the boys suffered under the ridiculously inhumane conditions at Guantanamo prison in Cuba. See for yourself how the Bush administration is polarizing the world one victim at a time.

Listed below are links to weblogs that reference Road To Guantanamo :