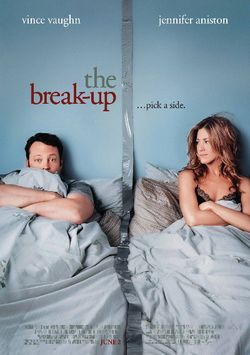 A bittersweet cautionary tale of mixed romantic signals, "The Break-Up" is an overlong minor key dramady that succeeds by virtue of the subtle chemistry between its leading players. Vince Vaughn and Jennifer Aniston give unaffected performances as a couple blinded by individual misconceptions and poor assistance from their so-called friends. The result is an intriguing meditation on modern American romance as set against the hopeful streets of Chicago. It’s a hard-won love story that shows the pitfalls of attempting to leverage love by playing the break-up card. "The Break-Up" comes with a slap and a kiss that’s at once bracing and pleasing.
Rated PG-13. 106 mins. (B-) (Two Stars)

Listed below are links to weblogs that reference The Break-Up: