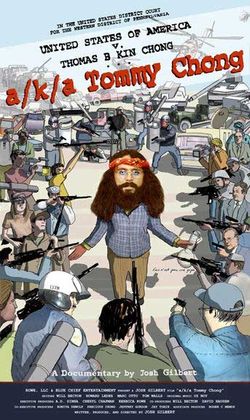 Josh Gilbert’s curt documentary about the arrest and conviction of comedian and former bong-maker Tommy Chong reveals the federal sting operation that put Tommy Chong in a state penitentiary for nine months for shipping glass bongs to Pennsylvania. Peter Coyote, Jay Leno, Bill Maher, Eric Schlosser and George Thorogood comment on Chong’s arrest, which is shown to have been an obvious strategy by former Attorney General John Ashcroft to punish Tommy Chong (of "Cheech and Chong" fame) for his lifelong comedic work built on ‘stoner’ humor. This state-of-American-affairs movie is just one more reminder of the heightened level of fascism that chokes the country under its neocon regime. Tommy Chong’s naturally easy-going personality and genuinely inspired humor brands him an elder statesman of comedy alongside the likes of George Carlin.

Listed below are links to weblogs that reference a/k/a Tommy Chong: