Brothers of The Head 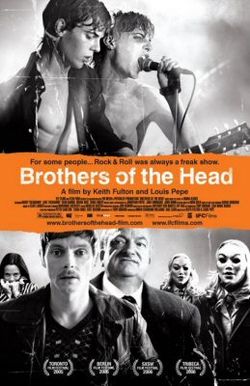 "Lost In La Mancha" directors Louis Pepe and Keith Fulton take a flailing mockumentary shot at a convoluted narrative about a pair of conjoined twins-turned-punk-rock-duo. Based on the 1977 illustrated novel by Brian Aldiss, the movie mixes faux documentary and interview footage with the movie-time narrative to tell an incomplete story set in black comedy trappings. Band manager Zak Bedderwick (Howard Attfield) takes twins Tom (Harry Treadaway) and Barry (Luke Treadaway) from their impoverished life on England’s eastern coast to turn them into a pop music sensation called "Bang Bang." The punk rock circus act is sidetracked by the inevitable influence of drugs, alcohol and a divisive woman. The Treadaway brothers give inspired performances as the joined-at-the-side brothers and their sincere efforts, in the face of the filmmakers’ vague narrative intent, drives the entertainment element of the misguided picture.

Posted by Cole Smithey at 02:39:03 PM in Comedy, Drama, Experimental

Listed below are links to weblogs that reference Brothers of The Head: