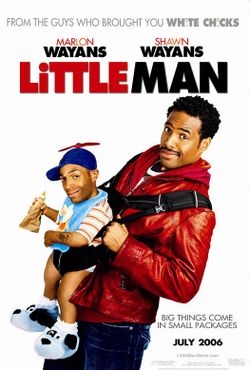 In spite of the admirable effort that the Wayans brothers went to in digitally transplanting Marlon Wayans head and facial expressions onto the two-foot-six-inch body of a nine-year-old actor (Linden Porco) "Little Man" is a bawdy and violent comedy that rankles more than tickles. Career criminal dwarf Calvin (Marlon Wayans) has just been released from prison when he steals a gigantic diamond that he's soon forced to hide with newlyweds Daryl and Vanessa (Kerry Washington and Shawn Wayans). Calvin and his half-witted accomplice (Tracy Morgan) dress Calvin up like a baby and leave him on the couple's doorstep to gain access to the diamond in time to turn it over to an impatient mob boss (Chazz Palminteri). The curious couple gradually decides to keep Calvin as their own even as the diminutive outlaw's true colors start to show. The film's overreaching attempts at inventive humor slip into sheer gibberish.
Rated PG-13. 97 mins. (C-) (Two Stars)

Listed below are links to weblogs that reference Little Man: