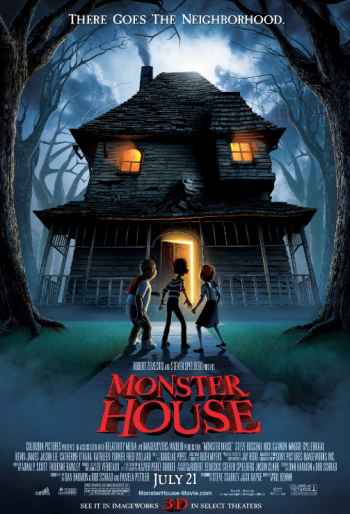 Dan Harmon, Rob Schrab, and Pamela Pettler wrote the script. The evidence of too many chefs spoiling the narrative broth is apparent throughout the movie. A demonic mobile mansion sits in a normal suburban neighborhood across the street from DJ (Mitchel Musso) a curious little boy obsessed with documenting the evil actions of its notoriously vicious owner, the depraved Mr. Nebbercracker (Steve Buscemi). Emboldened by his best friend (Sam Lerner) and a cunning faux Girl Scout (Spencer Locke), DJ and his friends attempt to put the house to sleep with lots of cough syrup even after the rampaging building murders two local police officials.

By the time the animated child characters are playing with dynamite to blow up the residence, some parents will have already escorted their children from the cinema.

Posted by Cole Smithey at 10:47:49 AM in Animation, Children, Horror