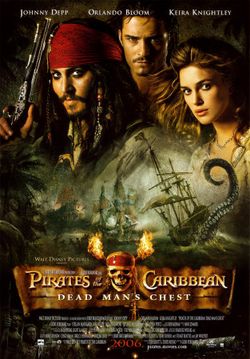 Overblown to the point of monotony, the second installment in the "Pirates of the Caribbean" franchise is a prime example of too much money and not enough story. Johnny Depp returns in his Keith Richards-inspired role as the totally gnarly pirate Jack Sparrow. Jack’s deal with the devil (or in this case Davy Jones – played by Bill Nighy) means that Jack is doomed to spend the afterlife in eternal damnation unless he can deliver a hundred souls to Davy Jones within three days or unearth Davy Jones’ famous chest with his still-beating heart. Keira Knightly returns as the glamorous tomboy Elizabeth Swan who is desperately in love with the ever-effete pirate wannabe Will Turner (Orlando Bloom). Pirate zombies and a giant octopus attend the 2.5-hour story that could easily have been told in 100 minutes.

Posted by Cole Smithey at 11:53:17 PM in Action/Adventure

Listed below are links to weblogs that reference Pirates of the Caribbean: Dead Man’s Chest: