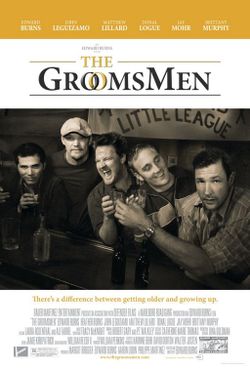 Writer/director Ed Burns adds a droopy fourth chapter to his Irish-American working class films that started with "The Brothers McMullen" (1995). "The Groomsmen" is a tepid drama/comedy about a group of four middle-aged friends from the same neighborhood in Long Island united for the marriage of Paulie (Burns) to his pregnant fiancée Sue (Brittany Murphy). Matthew Lillard, Donal Logue, John Leguizamo, and Jay Mohr compare their characters’ hard-won stripes of immaturity that they wear on their sleeves over the period of a long weekend. With zero chemistry between Burns and Murphy, the rest of the cast is left to aimlessly bump into one another to the sound of a relentless ‘80s music score. The film’s distinctly apolitical perspective creates a void at the heart of an already hollow story.

Listed below are links to weblogs that reference The Groomsmen: