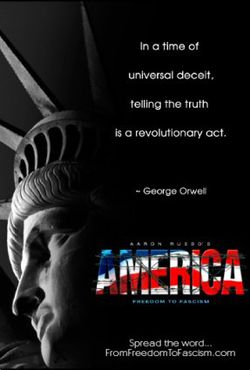 Film producer Aaron Russo ("Trading Places") uses the first half of his incendiary and scattershot documentary about the authoritarian state of America to expose the only partially ratified 16th amendment of the U.S. Constitution as not giving Congress the power to impose an unapportioned direct tax on labor. Interviews with former IRS employees and discussions about court cases contribute to his premise that there is no law binding citizens to pay the Fed’s "voluntary" income tax, but Russo doesn’t support his claims with hard evidence. It’s just so much editorial hearsay. The film goes on to proffer that since the Federal Reserve Bank emptied Fort Knox of its gold that our currency is worthless and that we the people are on the brink of being implanted with rice-sized tracking chips that will take the place of cash. "America: Freedom To Fascism" captures America’s current gloom and doom zeitgeist with plenty of controversial ideas to send any dinner party into a shouting match.

Listed below are links to weblogs that reference America: Freedom To Fascism :