Snakes On A Plane 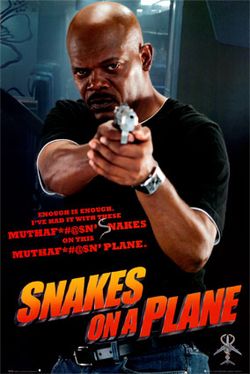 Samuel L. Jackson coasts on his fame as a case-hardened cop in this glorified B horror movie about a LA gang leader’s wicked attempt to get assassinate a potential witness by unleashing over 500 poisonous snakes on a flight from Honolulu to Los Angeles. A cross between a slasher flick and a disaster movie "Snakes On A Plane" casts CGI snakes attacking a young couple while they join the mile high club, a man who hates babies and dogs, and numerous other victims hoping to land in time to receive an antidote for their bites. Although the film’s production company New Line retooled the movie from a PG-13 to an R rating with ideas and dialogue from web fans, "Snakes On A Plane" is a boring ride.

Posted by Cole Smithey at 06:05:20 PM in Action/Adventure

Listed below are links to weblogs that reference Snakes On A Plane: