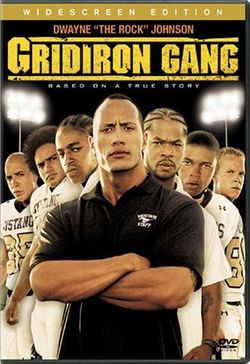 Inspired by a documentary of the same title, "Gridiron Gang" covers the struggles of a group of wrongheaded juvenile delinquents at California's Camp Kilpatrick where probation officer Sean Porter (Dwayne "The Rock" Johnson) and his coworker (Xzibit) create a football team for the boys to instill discipline and self-respect. The "Mustangs," as the team is called, proceed to play a season of football against regular high school teams in a fully sanctioned league. The movie runs down a checklist of sentimental cliches, right down to the obligatory illness of Porter’s mother, which lead to a hollow feel-good conclusion. Dwayne Johnson pushes his emotionally charged performance so hard that you think he might pop a blood vessel.

Listed below are links to weblogs that reference Gridiron Gang: