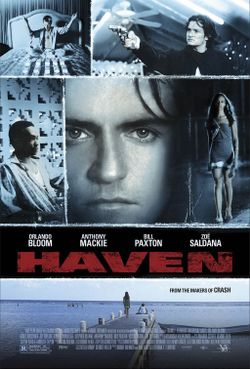 Lightweight man-boy actor Orlando Bloom co-produced "Haven," made in 2004, where he plays Shy an emotionally scarred young man whose interracial love for Andrea (Zoe Saldana) on Grand Cayman Island where they live ensnares them in a cycle of violence that indirectly connects to other less developed subplots. Writer/director Frank E. Flowers loses track of his own narrative puzzle that includes a story about a shady but rich Floridian (Bill Paxton) with an 18-year-old daughter (Agnes Bruckner – "Blue Car") escaping to Grand Cayman from the feds who want to arrest him. The haven of the film’s title refers to the Cayman Islands as both a tax haven and a tropical asylum from dangers of the western world.

Listed below are links to weblogs that reference Haven: