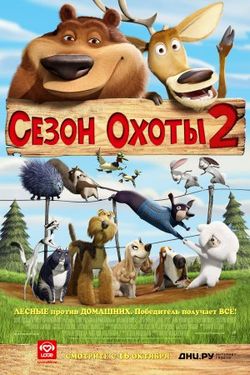 Animated children’s movies should not glamorize criminal activity and war, but that’s exactly what happens in "Open Season" when Boog (a domesticated grizzly bear voiced by Martin Lawrence) rescues a miscreant mule deer named Elliot (voiced by Ashton Kutcher) from a deranged hunter. Elliot persuades the naive Boog to abandon the comfy abode he shares with his keeper, Park Ranger Beth, so the two can heist candy bars from a convenience store. After ransacking the store in a fit of inexplicable violence, the pair is relocated to the forest three days before hunting season begins. The duo convinces their woodland neighbors to take arms against the hunters in an all out war.

Listed below are links to weblogs that reference Open Season :