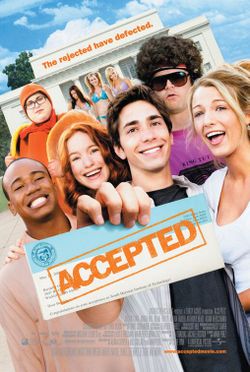 Steve Pink’s directorial debut (he was the screenwriter on John Cusack’s great black comedy "Grosse Point Blank") is a slight but punchy comedy of college-aged misfits that starts out strong before slipping down a greasy narrative slope into a dull third act that denies most of the laughs that preceded. High school senior Bartleby (the squeaky clean kid from the Mac commercials—Justin Long) is a clever guy whose marginal grades provoke rejection letters from every college he applies to. Desperate for validation and approval from his dismissive parents (Ann Cusack and Mark Derwin) Bartleby brainstorms into existence a phony Ohio college that accepts him as a student. Bartleby’s increasingly ambitious college hoax necessitates that he and his fellow college reject pals lease and renovate a disused mental hospital to house the "South Harmon Institute of Technology," which he presents as a "sister college" to the actual Harmon College a few blocks away. A glitch in the bogus college’s website unexpectedly attracts a hoard of slackers who install themselves in the dorm only campus. What started out as a façade for learning becomes an alternative education hub with a swimming pool and a skateboard half-pipe where the curriculum is devised and taught by the students.

Listed below are links to weblogs that reference Accepted: